Cryptocurrency is having a material impact on traditional finance, stocks, and markets more than ever. It is arguably no longer an isolated ecosystem, divorced from anything other than indeterminable mania and depressions.

Supporting this supposition are the developments in the crypto space just this year; several crypto-backed ETFs became tradable in North America, Bitcoin appeared on the balance sheet of several Fortune 500 companies, and crypto-exchanges have achieved public listings. Speaking of the devil, the Nasdaq-listed Coinbase Global Inc (NASDAQ:COIN) has reported its earnings today, comfortably beating its earnings expectations.

Fittingly, I plan to mark the occasion by crafting one of my periodical recaps of the crypto space.

The largest crypto exchange in the US, Coinbase, has reported Q2 earnings above expectations (total revenue of US$2.2 billion vs US$1.85 billion expected). Coinbase’s revenue growth is impressive considering that since the Company’s last earnings report, Bitcoin and its ilk have taken a nosedive in price.

Interestingly, Coinbase was able to increase its monthly user base and the value of processed transactions. All the while, the value of the crypto assets that were being traded declined by approximately 20%. In reward, Coinbase stock climbed 0.82% in afterhours trading, after it released its earnings report (however, the stock dropped 3.85% over Tuesday trading).

Further proving my point of Cryptos infiltration of mainstream finance, Coinbase reported that more than 9,000 financial institutions are included in their client base.

AMC Entertainment Holdings (NYSE:AMC) has announced, alongside its earnings report, that it will begin accepting Bitcoin (CRYPTO: BTC) by the end of the year. I suspect the announcement was for two important reasons. The first, to help distract from the bad earnings report. Admittedly, the theatre lost less than expected, but the report was still less than desirable (US$0.71 vs US$0.94 expected loss per share). The second reason is to appeal to its meme investor base (like GameStop’s foray into NFTs). However, unlike GameStop’s foray into NFTs, AMC move into Bitcoin is far more practical and has the potential to pay off in the long term (predictions of Bitcoin reaching 100K are rearing their heads again). As of writing, Bitcoin is comfortably above 45K, after spending the beginning of August sub-40K.

The amendment sought to clarify language regarding who would have to abide by the new reporting requirements.

As it stands, Crypto advocates believe the tax rules are too broad and would lead to some entities being unable to comply because they are not privy to the information that is required to be reported. Ultimately, the US cryptocurrency space will be profoundly negatively impacted. This is an opinion shared by Coinbase CEO Brian Armstrong and Kraken CEO Jesse Powell, who believe cryptocurrency firms are likely to shift overseas in response. 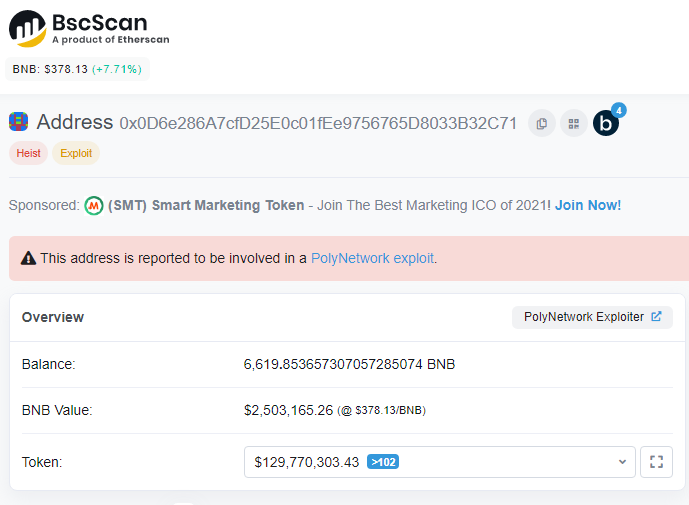 Approximately US$600 million worth of Crypto has been hijacked from the Defi platform, Poly Network. The hackers siphoned off Ethereum, Shiba Inu, Wrapped Bitcoin and USD coin, among others.

While the coins are likely irretrievable, some measures can be taken to ensure that the hackers don’t personally profit from the attack. Poly has called on the miners to blacklist funds coming from the hacker’s address. I’m unsure if such an action would set a precedent. At any rate, decentralised projects have been known to roll back transactions made during hacks. In this instance, the founders of Tether, a decentralised coin, has already stepped in and frozen US$33 million worth of coins associated with the hacker’s addresses.

NI Troubles: 'I would love to see that wall...

NI Troubles: 'I would love to see that wall...