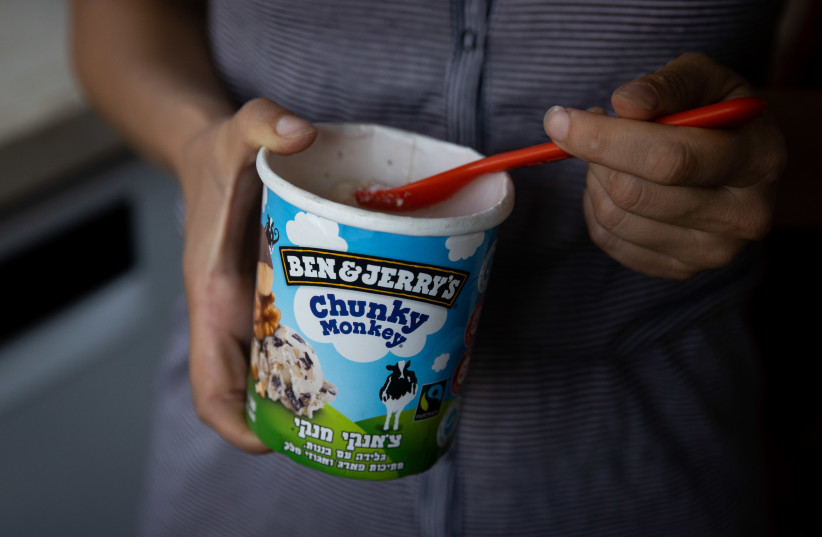 Hegar said he directed his staff to determine whether Ben & Jerry’s or Unilever took any action that would trigger his state’s anti-boycott law.

Texas’ pension fund amounts to over $100 million, according to Bloomberg, and Unilever is included in its portfolio.

Texas Government Code Chapter 808 prohibits the government from investing its pension fund in any party that boycotts Israel. It defines “boycott Israel” as “refusing to deal with, terminating business activities with, or otherwise taking any action that is intended to penalize, inflict economic harm on or limit commercial relations specifically with Israel or with a person or entity doing business in Israel or an Israeli-controlled territory.”

Ben & Jerry’s has operated in Israel for close to 35 years, with a factory in Be’er Tuvia. On Tuesday, Ben & Jerry’s announced that it would no longer sell its products in the “Occupied Palestinian Territories,” and was ending its contract with its Israeli licensee, which refused to participate in the boycott, at when it expires in 2022. The statement said they would look for a new arrangement and continue to sell its products in Israel.

The Vermont-based company’s independent board, however, released a statement of its own saying the previous statement came from Unilever, which owns Ben & Jerry’s, and does not reflect their position, which is to end sales in Israel entirely.

“Texans have made it very clear that they stand with Israel and its people,” Hegar said. “We are against all those wishing to undermine Israel’s economy and its people…My office has a long history of supporting Israel through our bond holdings and the Comptroller’s list of scrutinized companies with ties to Iran, as well as those with ties to foreign terrorist organizations.”

Hegar encouraged Texans to eat Blue Bell ice cream, which “was founded in Brenham, Texas and tastes much better than the overpriced, stuck-up stuff made by a foreign-owned company started in Vermont.”

Earlier this week, Foreign Minister Yair Lapid announced Israel would contact US states with anti-boycott laws to encourage them to take action.

Ambassador to the US and UN Erdan sent a letter to the governors of 35 states that have such laws. Most of the anti-boycott laws would require the state to stop entering into contracts with Ben & Jerry’s, and possibly Unilever, or to divest from them.

In a conference call with investors, Unilever CEO Alan Jope said the consumer goods giant is “fully committed” to continuing to do business in Israel.

“Obviously it’s a complex and sensitive matter that elicits very strong feelings. If there is one message I want to underscore in this call, it’s that Unilever remains fully committed to our business in Israel,” Jope said.

However, Jope did not say he would force Ben & Jerry’s to reverse its decision, and pointed to the ice cream company’s long history of taking social and political stances.

Prime Minister Naftali Bennett commented further on the Ben & Jerry’s boycott to a delegation of ambassadors to the US and UN visiting Israel on Thursday.

“Whoever thinks to turn boycotting the State of Israel into a matter of marketing or branding will find that it was the worst business decision they made,” Bennett warned.

“The consumers, certainly in Israel, but also in the US and other countries, don’t think it’s cool to take Hamas’s side,” the prime minister added. “We use all the means we have to act against this, including legal ones.”

Bennett said those who boycott Israel are punishing it for “the sin…of fighting terror” and will pay a price.

Erdan said that “at this time, when businesses are surrendering to BDS pressure and bringing anti-Israel political considerations into their decisions, the visit of UN ambassadors to Israel is especially important.”

Erdan, in cooperation with the American Zionist Movement and March of the Living, brought the delegation of 10 ambassadors to Israel a week ago to visit sites around the country and receive security briefings at Israel’s northern border and near Gaza, where they also met residents of communities struck by Hamas rocket-fire.

Among the countries whose representatives were on the trip were Australia, Argentina, Ukraine, Kenya, Guatemala, the Czech Republic, Hungary, the Dominican Republic, Tonga and Bhutan, with which Israel established ties in the past year.

Erdan said the ambassadors said that, following the trip, they would influence their countries to stand with Israel and against hypocrisy and discrimination against Israel, which is rampant in the UN.

Capcom putting this monster in Monster Hunter Rise: Sunbreak is an unforgivable insult to...