The second trailer for The Super Mario Bros. Movie has been officially released, yet alleged leaked promotional posters may have given away even more information than Nintendo and Illumination intended.

Mario and Donkey Kong charge at each other in a colloseum filled with red girders and apes via The Super Mario Bros. Movie (2023), Illumination, Nintendo

RELATED: John Leguizamo Outraged That ‘The Super Mario Bros. Movie’ Did Not Cast An “Actor Of Color” As Title Hero: “They’re Going Backwards”

As shown during Tuesday’s The Super Mario Bros. Movie Direct, we finally hear the voice of Luigi (Charlie Day) along with the debut of Princess Peach (Anya Taylor-Joy) and Donkey Kong (Seth Rogen).

The trailer shows Mario entering a colosseum that seems to be under the control of Cranky Kong. Mario is then hurled into a fight against Donkey Kong amid red girders. In fact, a plethora of elements from several Mario games seem to have been implemented without compromise.

We see Bowser has kidnapped Luigi and already wants to prevent Mario from jeopardizing his world domination efforts. Peach however, doesn’t seem to want to go down without a fight — even picking up a halberd from a Koopa — and it appears Mario goes through some sort of training montage on floating platforms.

There’s also the briefest glances at what appears to be the Fire Flower and Tanooki Suit power-ups (the former used by Peach), Mario and Luigi in what could be their “human” world, a herd of Yoshi, and even Mario and the gang driving karts across what seems to be the film’s version of Rainbow Road.

What’s of particular curiosity is what wasn’t seen in the trailer. Leaks across Twitter and other social media ahead of the trailer — mainly in the form of promotional posters — had suggested additional details not seen in the above trailer.

While some alleged posters continue to suggest Peach will avoid the damsel-in-distress stereotype (one poster emblazoned “She can do anything”), one rendered asset seems to show Mario and Luigi in Brooklyn, New York.

Toad and Peach march into battle, the latter dressed in biker gear and armed with a halberd via The Super Mario Bros. Movie (2023), Illumination, Nintendo

Much like the Super Mario Bros. Super Show incorporating Mario and Luigi as Italian-Americans from Brooklyn, we see the brothers stood in the middle of a street signposted a Brooklyn. We also see them standing in front of a “Super Mario Bros. Plumbing” van, complete with the logo resembling the classic Super Mario font, and a cartoon Mario drawn in series artist Yōichi Kotabe’s style. 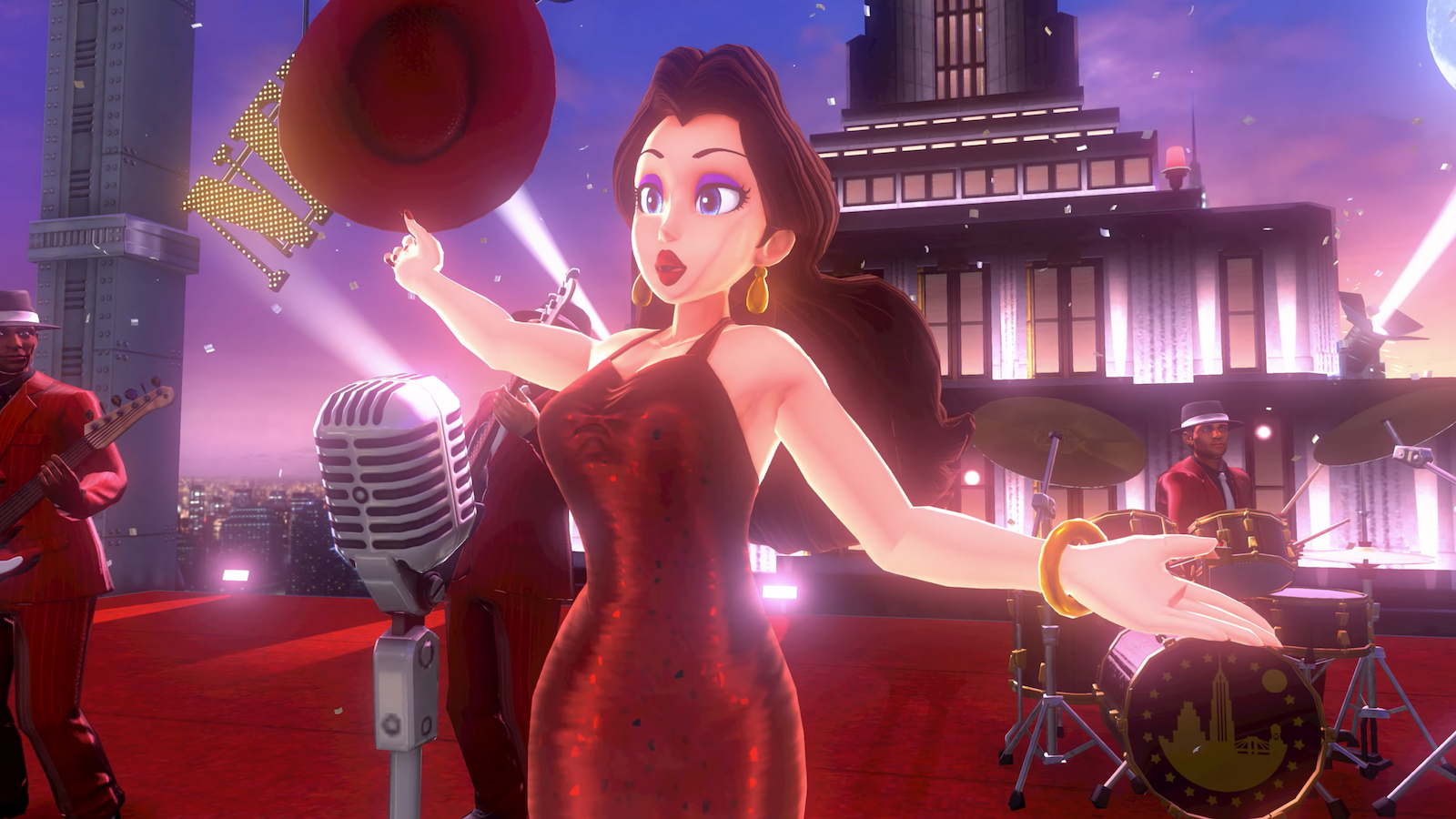 In the background we also see a black-haired woman in red suit, what many fans are assuming is Pauline — the damsel in distress saved by Mario back in the Donkey Kong arcade — that more recently appeared in Super Mario Odyssey as the mayor of New Donk City, which took clear inspiration from major US cities.

The street we see in the trailer (0:52) does seem to have the same brickwork on the buildings from the allegedly leaked render, which predates the trailer’s debut.

Mario and Luigi fist bump before going into another plumbing job via The Super Mario Bros. Movie (2023), Illumination, Nintendo

Alleged leaks from 4Chan or similar message boards also give the characters personalities- all fairly in line with that fans can expect from the games. That being said, similar leaks from 4Chan have also stated The Super Mario Bros. Movie would be a musical, and we have yet to hear a note in the trailers.

Mario and Peach look out over a floating obstacle course, much like a classic Super Mario level via The Super Mario Bros. Movie (2023), Illumination, Nintendo

Regardless, the leaks describe Mario as a “little guy from Brooklyn with big dreams,” Luigi as the titular character’s “devoted, but anxious, little brother,” Mushroom Kingdom Princess Peach as a “charismatic, capable, confident leader,” and Toad as an “adorable, cheerful, and perceptually snarky citizen of the Mushroom Kingdom.”

Conversely, the villainous Bowser (Jack Black) is described as “Obsessed with Princess Peach and gaining power, Bowser is King of the Koopa’s and the film’s crooning chanteuse-villain.”

RELATED: Host Of Cancelled ‘GamesMaster’ Revival Robert Florence Has Unhinged Meltdown Over Backlash To Chris Pratt’s Voice In ‘The Super Mario Bros. Movie’ Trailer: “Give It A F—Ing Rest For Five Minutes You F—ing Poindexter F–ks”

Amid claims the start of the The Super Mario Bros. Movie had leaked on 4Chan, an alleged synopsis was also shared. Even then, it’s not out of line with what we’ve seen thus far.

“The movie tells the story of two Brooklyn plumbers who are brothers and best friends: Mario, the brave one with the ‘let’s-a-go’ attitude, and the perpetually anxious Luigi, who would prefer to go nowhere.”

“We open with the Super Mario Brothers reckoning with their struggling plumbing business, and wind up in a whirlwind adventure through the Mushroom Kingdom. Through their journey, we meet a cast of familiar, lovable characters, ultimately uniting together to defeat the power-hungry villain, Bowser.”

The Super Mario Bros. Movie is originally scheduled to premiere April 7th, 2023. Even so, the new trailer ends with just “April,” which may raise some questions regarding the film’s actual release window.

A Fire Flower powered-up Peach stares at the fireball in her hand via The Super Mario Bros. Movie (2023), Illumination, Nintendo