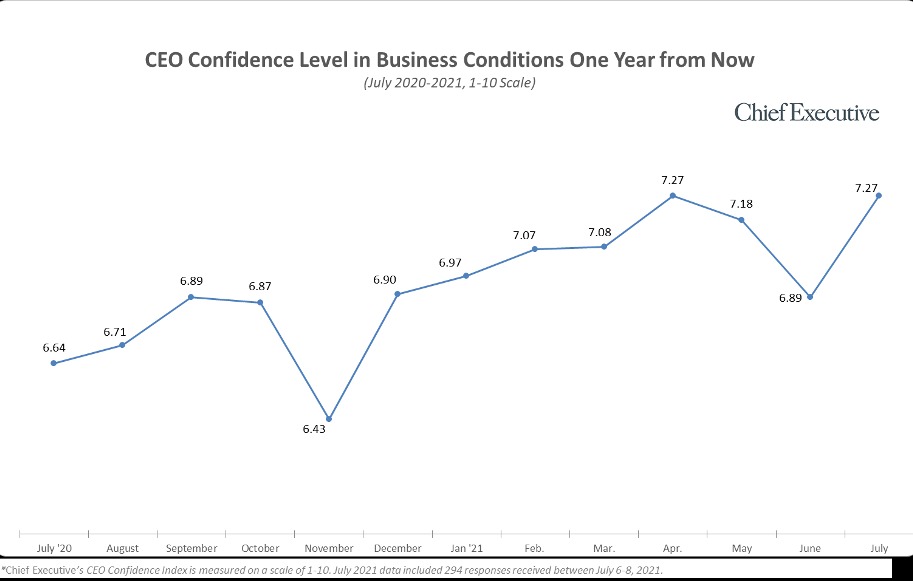 After two consecutive months on the decline, CEO optimism roared back in July to 2018 levels as strong demand and progress battling the pandemic fueled an ever-brighter outlook that business—and society—are returning to normal.

Those are the key findings from Chief Executive’s latest poll of 294 U.S. CEOs, fielded from July 6-8, which show a significant reversal in CEO confidence versus prior months. Our leading indicator jumped to 7.3 out of 10 on our 10-point scale, clawing back the losses recorded in May and June. CEO confidence in the current business environment also gained ground, to 7.4/10—the highest level since May 2019.

Among the reasons driving polled CEOs’ enthusiasm are increasing demand, continued low interest rates and a return to normalcy that they expect will curb the talent shortage and further lower the unemployment rate. News that a growing number of companies are reinstating on-site work policies in the fall is also driving confidence levels and attenuating previous concerns over labor costs, supply-chain snarls and even inflationary pressures.

“These are the Best of Times!” says Bill Sennholz, CEO of Forward Bank, a Wisconsin-based depositor-owned independent community bank, who rates his view of the business environment today and 12 months from now a perfect 10 out of 10. “No unemployment, low interest rates, factories running at capacity, shelves are still empty, everyone has lots of money,” he says, forecasting double-digit growth in profitability over the next year.

Sharon Birkman, CEO for leadership consultancy Birkman International, says she expects improvement in the business landscape thanks to a “gradual recovery from Covid shutdown, restoration of our staff and office culture, [and] more general confidence in the economy.” She also forecasts growth in profits in the year ahead.

As CEO of Corporate Essentials, a provider of office coffee services in the NJ, NYC, Manhattan and Brooklyn area, Judson Kleinman has good reasons to expect business conditions to go from 5/10 to 9/10 in the near term: “Employees are coming back to the offices,” he says, also forecasting double-digit growth in profitability over the coming months.

Echoing the enthusiasm over a return to on-site work, DeLinda Forsythe, CEO and founder of office furniture provider Innovative Commercial Environments, says “leaders realizing they need to create a better office experience” is one the main reasons behind her optimism and double-digit profit growth forecast.

Still, CEOs remain heavily divided on the future: the same proportion (36 percent) say they expect conditions to improve in the next year as those who say they will worsen. What’s driving the significant jump in our Index reading in July is the level to which CEOs expect conditions to worsen vs. improve—and those with a positive lens are forecasting near-perfect conditions in the months ahead.

Among the top concerns of those expecting conditions to worsen are potential regulatory and tax changes.

“Biden’s policies and taxation are going to degrade incentives for businessmen and women to thrive,” says JD Harris, CEO of Ascent Solutions LLC, a Cloud and cybersecurity consultancy firm based in Minnesota.

“Uncertainty over the Biden administration plans. The current outlook is not business friendly,” echoes William Dick, president and CEO of Illinois Rocstar, an engineering modeling and simulation company.

For others, such as CEO Benjamin Lin of Pacific Alliance Bank and Kevin Phelps, president of AREV Life Sciences, uncertainty around the Delta variant or a potentially new wave of Covid is fueling caution. They both forecast business conditions to remain relatively the same for some time still.

Inflation also remains a concern—at least for 16 percent of CEOs polled this month, including Roseanne Luth, CEO of online market research company Luth Research, who says “Too much spending currently, and there will be more taxes and higher prices.” For those reasons, she expects to rein in capex and hiring by 10 to 20 percent to counter these potential effects.

The proportion of CEOs projecting increases in profits and revenues over the coming months rose in July, to 80 percent (+7 percent) and 85 percent (+4 percent) respectively, after a slight dip in June.

The proportion of CEOs anticipating to increase capital expenditures in the year ahead climbed back to 60 percent from 51 percent in June—further confirming the bullish outlook among surveyed CEOs.

The proportion of CEOs predicting they will increase their hiring remains relatively unchanged, at 67 percent vs. 68 percent the month prior.

In a complete reversal from May, CEOs from almost all sectors reported increased optimism in future business conditions. Transportation CEOs were the only group with a significant drop in confidence, with some citing material and labor increases as the primary issues affecting their profitability. This could change, they say, depending on the government’s level of investment in the looming infrastructure bill.

Elsewhere, CEOs say the return to pre-Covid activities is supporting renewed growth. In the construction industry, where optimism jumped 24 percent month-over-month—the second largest increase since May—CEOs say demand is at an all-time high.

Year over year, we observe a similar scenario, with confidence levels on the rise across most sectors.

Forecasts by size ticked up across most groups in July, but the data shows optimism growing in reverse relation with size, with CEOs of smaller companies gaining 9 percent over the previous month vs. 1 percent for the largest cohort. All groups now hover around a forecast rating of 7 out of 10 for this time next year.

About the CEO Confidence Index

The CEO Confidence Index is America’s largest monthly survey of chief executives. Each month, Chief Executive surveys CEOs across America, at organizations of all types and sizes, to compile our CEO Confidence Index data. The Index tracks confidence in current and future business environments, based on CEOs’ observations of various economic and business components. For additional information about the Index and prior months data, visit ChiefExecutive.net/category/CEO-Confidence-Index/