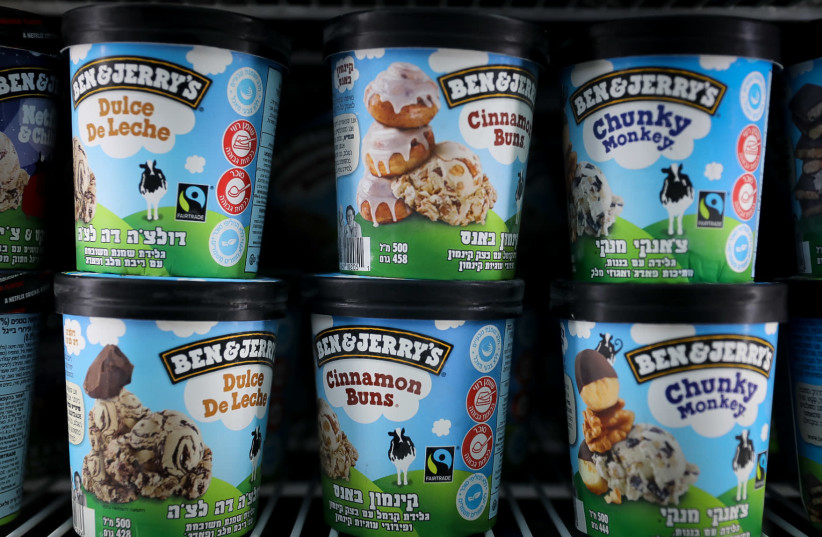 The decision by Ben & Jerry’s in the United States to end its contract with its Israeli licensee over its refusal to stop selling ice cream over Israel’s pre-1967 border gave some Israeli politicians sweet political points and others a brain freeze.
It all depended on whether the politicians got the right scoop on who were the good and bad guys in the story and who got spoon-fed incorrect information,

Soon after the news broke, former prime minister Benjamin Netanyahu, who is Israel’s best-known ice cream consumer, proudly tweeted that he would boycott all of Ben & Jerry’s ice cream.

“Now we Israelis know which ice cream NOT to buy,” Netanyahu tweeted, along with an Israeli flag and a muscular arm emoji.

Netanyahu apparently did not get the news before he tweeted that the Israeli licensee of Ben & Jerry’s had fought for years to continue to sell the product throughout the country. Had he known, perhaps he would have tweeted the flag and the muscular arm emoji with a statement about continuing to buy the ice cream in Israel while boycotting it abroad.

He was not the only one misinformed. Finance Minister Avigdor Liberman (Yisrael Beytenu) posted a picture of himself on Facebook eating an ice cream cone that he said was not only tastier than Ben & Jerry’s but that also does not boycott.

“Even with ice cream, the fate of [his West Bank settlement] Nokdim will be the same as the fate of Tel Aviv,” posted Liberman, who as finance minister should know better about how an Israeli company works.

Former Likud minister Ofir Akumis similarly announced on Facebook that he would “stop buying Ben & Jerry’s in Judea and Samaria and everywhere else in the world,” without differentiating between the Israeli company that has fought to keep its ice cream on the shelves in Efrat and Neve Aliza and the products by the same name sold globally.

But the tip of the cone belonged to Israel’s economy minister, Orna Barbivay (Yesh Atid), who humiliated herself on Tiktok by posting a video of herself getting home from work and immediately throwing in the trash what appeared to be a full pint of Dulche De Leche, one of Ben & Jerry’s best flavors.

Ben & Jerry’s licensee Avi Zinger, who brought the ice cream to Israel three decades ago, said Barbivay’s decision hurt him almost as much as the decision made in Vermont.

While those Israeli politicians were left out in the cold, there were also plenty who hit the sweet spot in their responses.

The first current MK who responded was Simcha Rothman of the Religious Zionist Party, who immediately urged Israelis to continue eating Israeli made Ben & Jerrry’s and tweeted that the Israeli licensee deserved credit for fighting against a boycott of Judea and Samaria.

Foreign Minister Yair Lapid (Yesh Atid) decided to take practical steps along with his tweet that “Ben & Jerry’s decision represents shameful surrender to antisemitism, to BDS and to all that is wrong with the anti-Israel and anti-Jewish discourse.”

He said he would work to enforce anti-Israel boycott laws passed in more than 30 American states. By the morning, Israel’s outgoing ambassador to the US Gilad Erdan, who is in Israel, had already written to the governors of 35 states, demanding they enforce sanctions against the American company.

Ben & Jerry’s decision represents shameful surrender to antisemitism, to BDS and to all that is wrong with the anti-Israel and anti-Jewish discourse.
We will not be silent.

Time will tell if the efforts of Bennett, Lapid, Shaked and Rothman will result in the decision being overturned – or at least stop the sales of Ben & Jerry’s in Israel from being frozen.