CEO EXTRA.com
HomeBusinessHow Bob Chapek was ousted from Disney by CFO who plotted behind...
Business

Returning Disney CEO Bob Iger complained his successor Bob Chapek was ‘incompetent’ before plotting with the CFO to oust him, reports say.

Even though Iger, 71, finally stepped down in 2020 following 15 years of growth at the House of Mouse, sources familiar with the transition told the Wall Street Journal he never really let go of the reins.

Iger would allegedly hold meetings with executives without Chapek, 63, and often complain about his successor’s leadership and refusal to lean on him, saying the new CEO was doing a ‘terrible job.’

Among one of Iger’s closest confidants was CFO Christine McCarthy, who slammed Chapek’s leadership as ”devastating,’ and made a call on November 16 asking the former CEO to take the reins again.

Two days later, Disney’s board would offer Iger the job and then sack Chapek, who was marred by dropping stock prices and a battle with Florida lawmakers over its special tax district status.

Revelations into the insight of Chapek’s final days comes as Disney warns staff that job cuts are imminent with its stock down more than 42 percent in the last year. 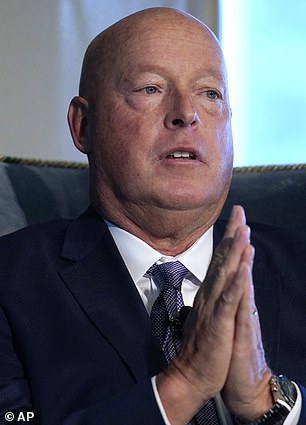 Iger also grew angry at Chapek for not looking to him for advice, while Chapek accused his mentor of being unwilling to let go of the reins at the company and holding meetings without him. The duo are pictured during Disney World’s 50th anniversary celebration in 2021 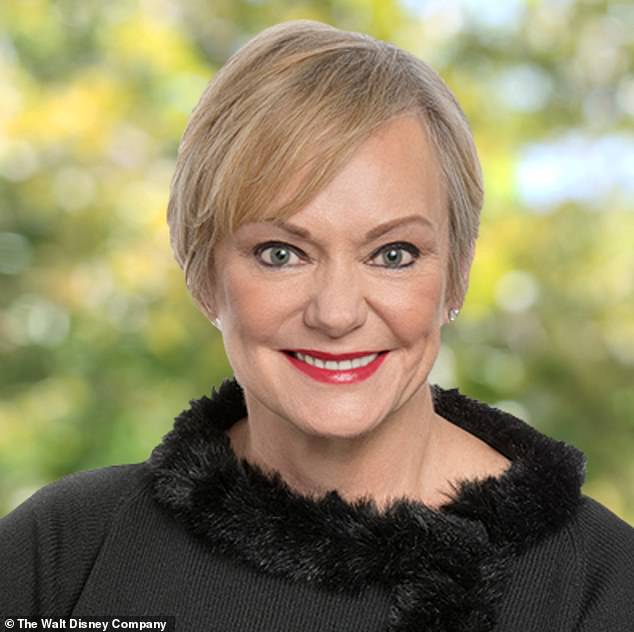 One of Iger’s closest confidants, CFO Christine McCarthy (above), was at odds with Chapek, sources say, and made a call on November 16 for Iger to return

July 2021 Bob Chapek gets the blame when a feud erupts after actress Scarlett Johansson sues Disney, accusing it of breach of contract in a dispute over the release of Black Widow. Former CEO Bob Iger is reportedly embarrassed by Disney’s approach to the suit.

March 2022 Chapek faces a backlash from Disney staff for failing to criticize Ron DeSantis’s ‘Don’t Say Gay’ bill. He eventually speaks out, but is then bruised by a public battle with the Florida governor.

March 2022 Employees, furious about the handling of the Florida bill, claim that Disney execs censored ‘overtly gay affection’ in recent movies. The company backtracks on some of those decisions, reinstating a kiss in the Toy Story spinoff ‘Lightyear’.

June 2022 Chapek ousts Peter Rice, the well respected chairman of entertainment and programming. The Hollywood Reporter says insiders are ‘baffled’ by the decision. ‘This stuns me,’ says one executive.

November 2022 Costs at Disney’s streaming business are blamed for weaker-than-expected fourth-quarter earnings. Shares continue to tumble before Chapek is ousted.

According to current and former executives at Disney, Iger continued to act as a ‘shadow CEO’ at the company after retiring but taking a job as an executive chairman.

Iger allegedly continued to work in his office at Disney’s headquarters in Burbank, California, and conducted business with top executives without inviting Chapek.

The meetings were to let Chapek know, ‘They work for me, not for you,’ the sources said.

Chapek, on the other hand, wanted to find his own footing in the company and often strayed from Iger’s advice.

Chapek, however, pushed for the cuts to preserve cash, but the board sided with Iger, who maintained much of his power to help guide Disney through the pandemic.

Sources said Chapek was ‘livid’ and would privately complain to his deputies that he ‘wasn’t fully in control.’

After Iger touted his work during the pandemic during a New York Times interview, the sources said that any chances of Chapek personally turning to his mentor for advice ‘went from unlikely to out of the question.’

The two men also clashed over the rollout of Disney’s streaming service, where Iger had projected the company would get 60 to 90 million users within its first five years.

Chapek, noting the rise of streaming during the pandemic, raised the projections in December 2020 to 260 million subscribers, with Iger saying it ‘wasn’t smart to offer such an ambitious goal.’

Since Chapek took over, the company has lost a full one-third of its value. 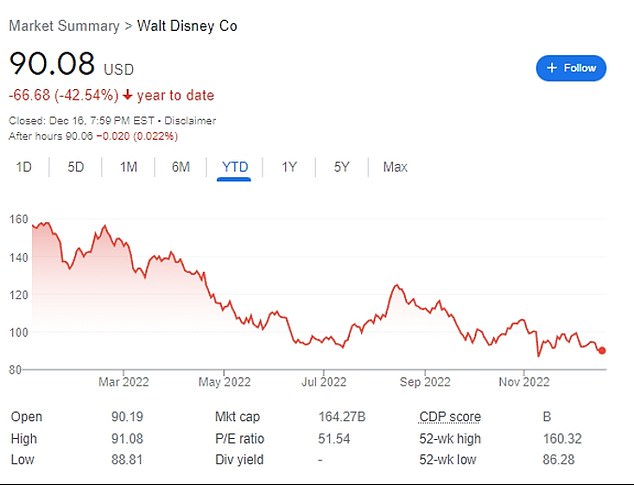 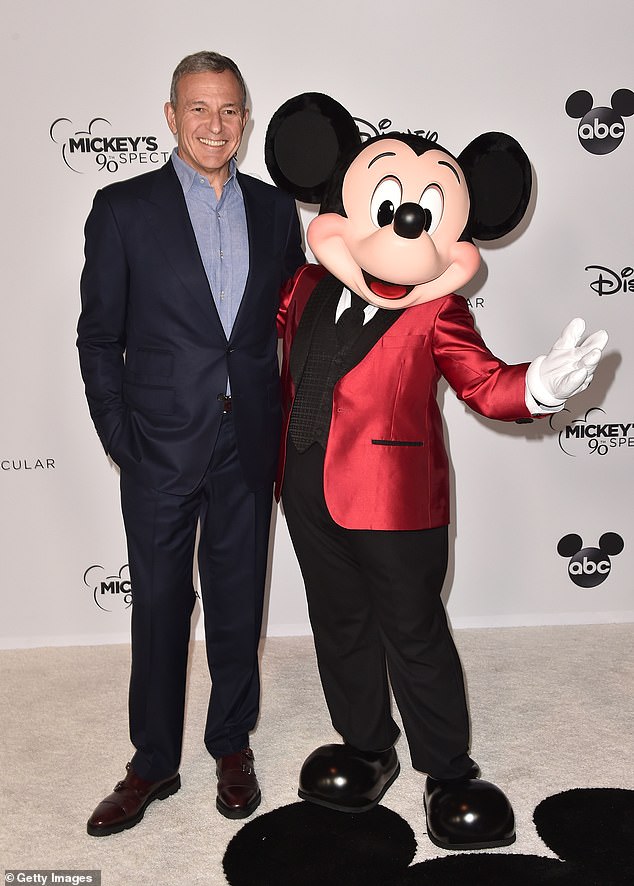 Bob Iger, who led Disney through a 15-year era of explosive growth, has returned to the helm as his successor is marred in controversy and poor profit reports

McCarthy was among the leading executives who often chastised Chapek’s failings, catching him off guard during a meeting where she laid out Disney’s dropping revenue, sources told the WSJ.

They noted the Chapek was angry at McCarthy for not previously discussing the numbers with him while giving briefing materials to the rest of the board.

Chapek allegedly held meetings without McCarthy and said she had ‘lost focus’ and become ‘unstable.’

By the fall, MCCarthy slammed Chapek’s leadership in a text exchange with CNBC’s Jim Cramer, who echoed criticisms against the then-CEO on Mad Money.

The day after the episode aired, Disney’s stock fell by 13.2 percent, the largest one-day drop in the company’s history.

Iger’s sensational return as Disney’s CEO came as a shock to even some of the media conglomerate’s senior executives — who only found out about the change in leadership while at an Elton John concert on November 20.

Chapek is expected to receive a $23 million exit package, and will receive even more if share prices bounce back up after falling more than 42 percent over the past year.

Since Chapek took over the company, it has been blasted as becoming too woke as the House of Mouse further mishandled its relations with Florida Gov. Ron DeSantis over the bill, which bars teachers of students in third grade and below from discussing sexuality.

As a result, DeSantis decided to strip Disney World of its special tax privileges.

The company has also been slammed for becoming more woke, with scenes of a lesbian kiss in kids’ movie Lightyear, and a transgender man buying tampons in TV series Baymax – although those productions were likely signed off during Iger’s tenure. 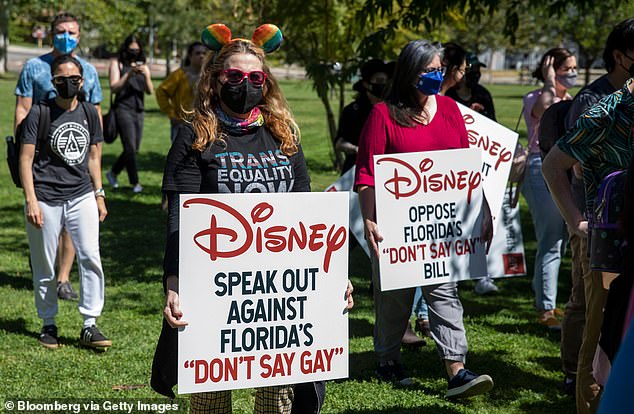 Chapek was criticized for not condemning the bill, to try and quell the backlash with a backtracking statement to staff. (Pictured: Disney employees in California rallying against the bill on March 22)

Disney is also facing pressure from park workers who have demanded wage increases as long-time employees say they’re ‘grossly underpaid’ while the company enjoys $3.6 billion in profits over their work.

The Services Trades Council Union (STCU), which represents 42,000 of Disney’s 70,000 workforce, has called on the company to bump employees’ wages to meet their high cost of living.

While Disney granted employees a $2 raise to $15 an hour in 2021, the union said it was a far cry from the $18.19 now needed to make ends meet as workers protested outside the Magic Kingdom last week.

Earl Penson, who’s worked as a chef for 11 years, told The Guardian that the latest pay increase was not distributed evenly as he only makes 50 cents more than a new hire.

‘We’re grossly, grossly underpaid for the hours that we work,’ Penson said. ‘A lot of us have the same story in not being able to afford the cost of living on the pay that we make.’

‘A lot of Disney workers are barely squeaking by. You have workers with families sleeping in their car.’

He criticized Disney for not raising their wages to meet the average standard of living in Orange County, Florida, which the MIT Living Wage Calculator puts at $18.19.

‘It’s really heartbreaking, it’s a morale downer, because you would think they would recognize how hard the cast members work,’ Penson said. ‘I wish they would let us know that they appreciate the magic that we bring. 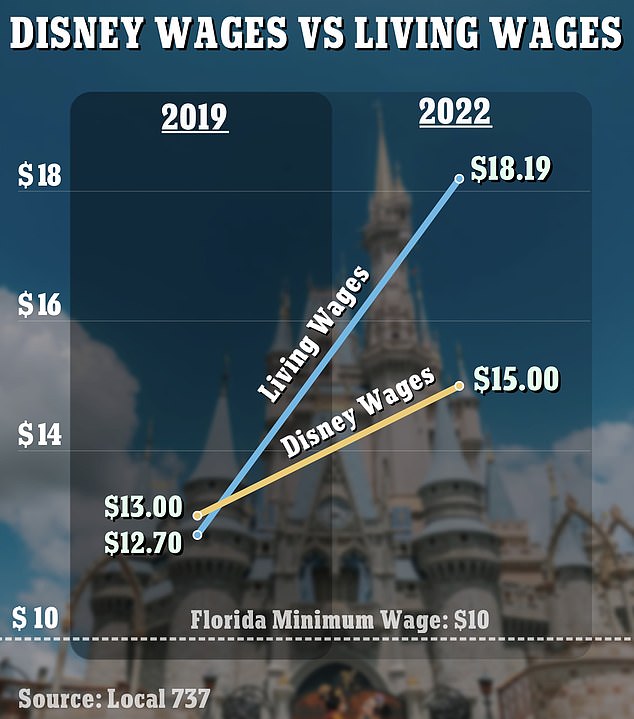 Disney park workers are demanding their wage of $15-an-hour increase to meet the current standard living wage of $18.19 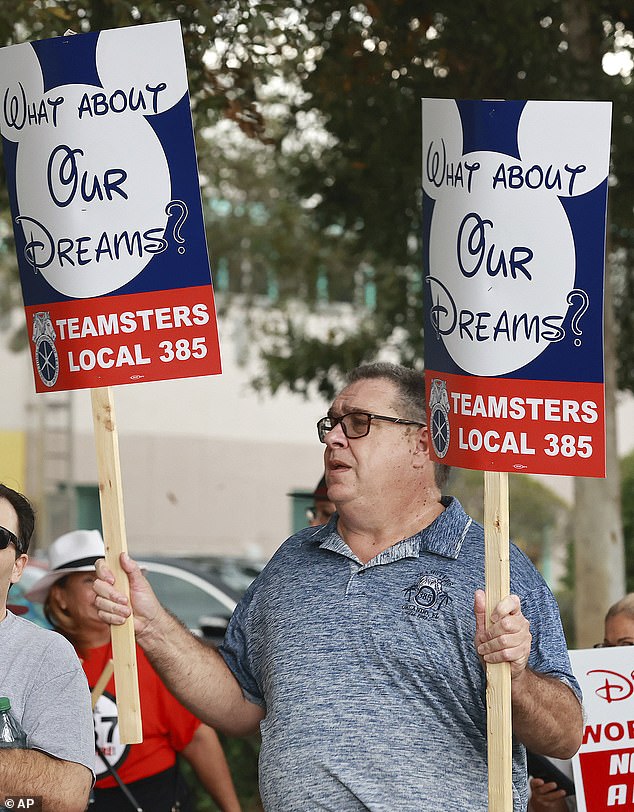 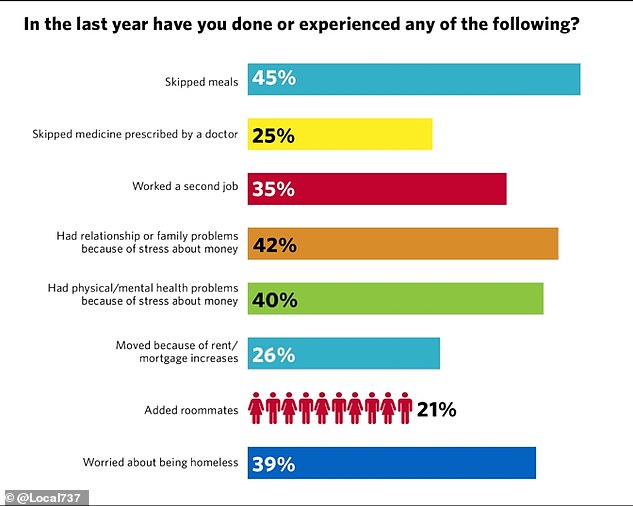 A survey from one of the protesting unions found employees are skipping meals, moving, taking second jobs and roommates just to make ends meet

According to Local 737, one of the six unions represented by STCU, about 75 percent of its members have had to skip meals over the past year just to save money.

Another 35 percent needed a second job to get by, and a fourth of the union members skipped out on purchasing medicine prescribed by a doctor.

About 40 percent or more have suffered stress over money, which has affected their relationships and health.

The Union also found that 26 percent of its members have had to move because their rent or mortgages had gone up, while 21 percent have taken on roommates to help with the costs.

About 39 percent of the members said they were worried about being homeless.

In regards to the negotiations, Disney said it was considering employees’ call for a pathway to a $20-an-hour salary.

‘We have presented a strong and meaningful offer that far outpaces Florida minimum wage by at least $5 an hour and immediately takes starting wages for certain roles including bus drivers, housekeepers and culinary up to a minimum of $20 an hour while providing a path to $20 for all other full-time, non-tipped STCU roles during the contract term.’ the company said in a statement.