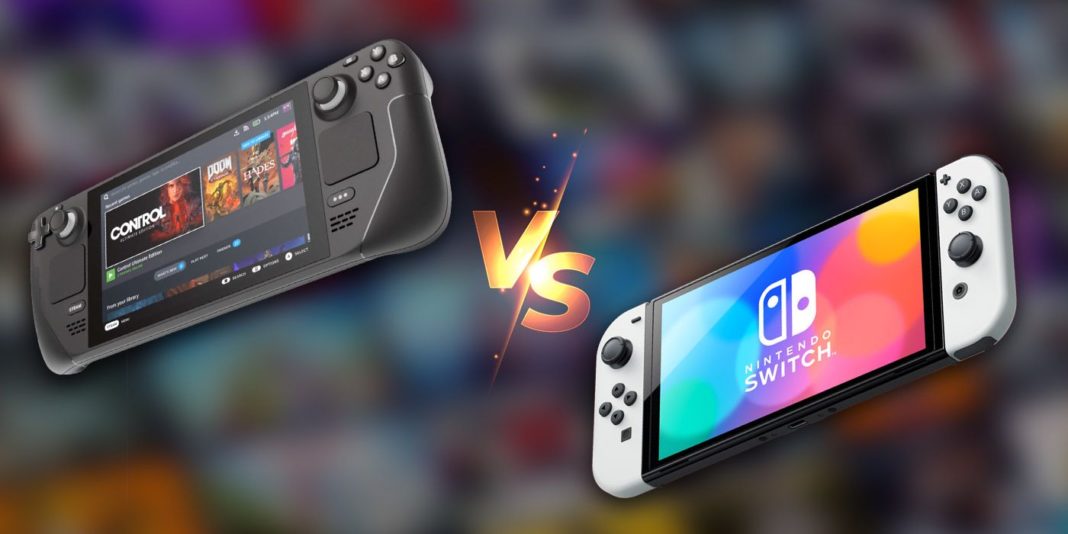 July has been an exciting month for the video game industry, given that it saw the announcement of two new consoles. Several weeks ago, Nintendo finally put to rest the long-running rumors about an updated version of the Switch, with the announcement of the Nintendo Switch OLED. Just a few days ago, Steam also made a surprising announcement with the reveal of the Steam Deck.

Given that both the Steam Deck and the Nintendo Switch OLED can be used as handheld gaming devices, the quality of the screen is essential. As the name suggests, the Nintendo Switch OLED features a 7-inch OLED screen, which is a massive improvement from the original Switch’s 6.2-inch LCD screen. According to Nintendo, the Switch OLED can display up to 720p resolution in handheld mode and up to 1080p in docked mode. The console has a maximum frame rate of 60 FPS, but it does not support 4K resolution even when docked. The Switch OLED comes with a dock right out of the box, allowing players to switch between handheld and docked seamlessly.

On the other hand, the Steam Deck features a 7-inch LCD screen that can display 720p at 60 FPS. However, its advantage over the Nintendo Switch OLED is that the Steam Deck can reach 4K resolution graphics depending on the TV or monitor it is hooked up to. Unfortunately, the Steam Deck doesn’t come with a dock right out of the box, and players must purchase a separate proprietary dock, or connect the device to the monitor or TV via a USB-C cable.

In terms of other technical specifications, Valve’s Steam Deck features an AMD Zen 2, 3.5 GHz CPU, paired with an AMD 8 RDNA GPU, and 8GB RAM. Unlike the Switch, the Steam Deck offers three choices to choose from in terms of internal memory: 64 GB eMMC, 256 GB SSD, and 512 GB SSD. However, it is worth noting that since the Steam Deck is designed to play most PC games, players should take into consideration which model to choose.

Reports suggest that the cheapest Steam Deck, which features the 64GB eMMC storage, may run games slower compared to its higher-end siblings that feature NVMe SSD storage. The Steam Deck also features Bluetooth 5.0, allowing players to connect wireless peripherals such as mice, a keyboard, and headphones.

While the Nintendo Switch has been a consistently top-selling console, it is not exactly made to seamlessly run high-end games, with some exceptions such as Skyrim and The Witcher 3 ports. However, the Switch’s less-beefy internals isn’t exactly a flaw, given that it is primarily made to run Nintendo games. The same is true for the Switch OLED, which features the same NVIDIA Custom Tegra processor and 8GB of RAM.

The internal storage of the upcoming OLED model has been upgraded from 24GB to 64GB eMMC, though players can still purchase external SD cards to increase internal memory even further. While the Nintendo Switch OLED has Bluetooth, Nintendo clarified its function is to connect with the Joy-Cons. Players would likely have to purchase additional accessories to connect to other wireless peripherals.

One of the biggest differences between the Switch OLED and the Steam Deck is the controller. Both devices feature everything one can expect from handheld gaming devices: a D-pad, thumbsticks, trigger buttons, and a touchscreen. However, one thing that the Steam Deck has over the Switch OLED is the new Steam Controller-style trackpads, that Valve claims will allow players to have better precision when playing games like first-person shooters. While the inclusion of trackpads is understandable, especially since the Steam Deck is designed to play PC games, many are concerned about its layout and whether it will be comfortable to hold during long gaming sessions.

The Switch OLED button layout, on the other hand, remains similar to the original Switch. Players shouldn’t feel any difference apart from its heavier weight at 320g compared to the original Switch at 297g. In comparison, the Steam Deck weighs 669g or 1.47lbs, which is unsurprising given its beefier internals. It is also worth noting that the Steam Deck does not feature removable controllers like the Switch OLED, so players should also keep that in mind. Lastly, in terms of battery life, the Switch OLED would run approximately 4.5 to 9 hours, depending on the activity, while the Steam Deck can run 2-8 hours.

In terms of games, the Steam Deck and the Nintendo Switch OLED serve two very different markets. While the look and build of the Steam Deck look as if it’s a gaming console, Valve revealed that it is really a portable PC. The Steam Deck will run a new version of SteamOS, which is Valve’s Linux-based OS. Valve also claims that the Steam Deck can play every single PC game on Steam, and players can even install other games stores on it. Of course, it is no secret that the number of games available on Steam is almost endless, making the Steam Deck a tiny powerhouse device.

On the other hand, while many third-party games are available to play on the Switch OLED, its defining feature is the many Nintendo-exclusive games that cannot be played outside of Nintendo’s ecosystem. As a result, players who are big on Nintendo games may not even see the Steam Deck as a viable option, given that it cannot play Nintendo games.

As far as pricing is concerned, the Steam Deck will be available for $399 for the 64GB model, $529 for the 256GB model, and $649 for the 512 variant. Given its higher-end specs, it is unsurprising that the Steam Deck is much more expensive than the Switch OLED, which is priced at $350. The Steam Deck is slated to release in December of 2021, and it appears that the demand for it is quite high, and players can already find the Steam Deck being resold at exaggerated prices. Meanwhile, the Nintendo Switch OLED will be released in October 2021, with pre-orders already available today.

MORE: Is the Steam Deck Worth It?

Ramon is a writer for GameRant and an avid gamer since the era of the original PlayStation. Ramon has been captivated with video games and the way it serves as an escape from real life. His love for gaming transcends genres as he enjoys playing Stardew Valley as much as Resident Evil. When not attached to a controller, you can find him hammering away at a keyboard in hopes of sharing his voice with the gaming community. Ramon also likes to live his best life by watching funny videos on YouTube. You can follow him on Twitter @ramonhara.