DeSantis has executive privilege, a judge ruled, setting up...
Leadership

Update: Microsoft says the article on its support site...
Business

Traders work on the floor of the New York...

Tencent and NetEase can only offer online gaming to minors from 8pm to 9pm (00:00 to 01:00 GMT) on Fridays, weekends and holidays.

China will limit the amount of time children can play videogames to just three hours most weeks, a dramatic escalation of restrictions which dealt a blow to the world’s largest mobile gaming market, as Beijing signaled it would continue a campaign to control the expansion of large tech companies.

Gaming platforms from Tencent Holdings Ltd. to NetEase Inc. can only offer online gaming to minors from 8 p.m. to 9 p.m. on Fridays, weekends and public holidays, state news agency Xinhua reported, citing a notice by the National Press and Publication Administration. The new rules are a major step-up from a previous restriction set in 2019 of 1.5 daily hours most days.

The escalating restrictions on the lucrative gaming business are likely to spook investors who had cautiously returned to Chinese stocks in recent days, exploring bargains after a raft of regulatory probes into areas from online commerce to data security and ride-hailing ignited a trillion-dollar selloff in past months.

“This ruling is the strictest one to date and will essentially wipe out most spending from minors, which we note was already extremely low,” said Daniel Ahmad, an analyst at Niko Partners.

Later in the day, Beijing signaled its efforts to rein-in large tech companies will continue. A top-level committee led by President Xi Jinping said that efforts made to prevent the “disorderly expansion of some platform companies” had been a success while also vowing “more transparency and predictability” in setting policies, according to Xinhua.

Netease slid as much as 9.3% in pre-market trading in New York, while Prosus NV, Tencent’s biggest shareholder, fell in Europe.

“Three hours per week is too tight. Such a policy will have negative impact on Tencent too,” Steven Leung, an executive director at UOB Kay Hian (Hong Kong) Ltd. said. “I thought regulatory measures would take a break gradually but it’s not stopping at all. It will hurt the nascent tech rebound for sure.”

Tencent and other companies have said children account for only a fraction of their businesses, especially after recent restrictions. The country’s largest games company has said the revenue from minors yields less than 3% of its gross gaming receipts in China.

Other key points in the new rules include: 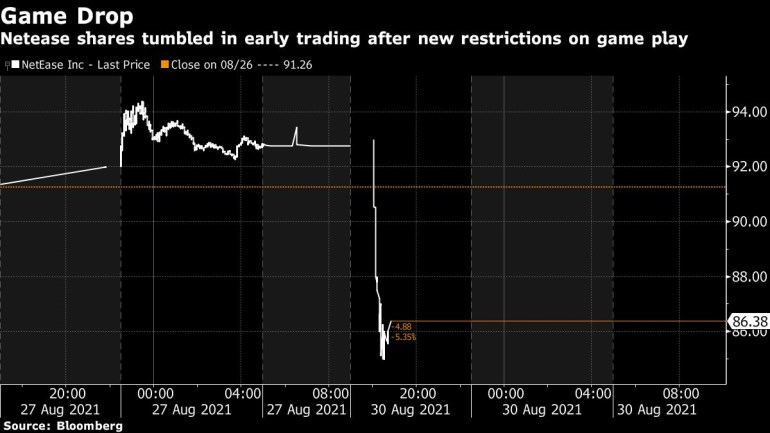 The new rules underscore the extent to which Beijing is intent on curbing gaming addiction among youths and pushing its future workforce toward more productive pursuits. Earlier this month, state media published forceful critiques of the industry and at one point labeled games “spiritual opium.” That description was later removed, but share prices plunged out of concern for further restrictions.

Tencent, NetEase and other online games companies in China may experience merely a modest hit to financial performance from the tightening of time restrictions on minors time spent playing games to three hours per week… though margins could be pinched in the near-term to accelerate the roll-out of compliance measures.

Tencent, which in 2018 and 2019 grappled with a widespread gaming industry crackdown then focused on myopia among children, is also struggling with a plethora of tightening regulations in areas such as social media, online finance and commerce.

It has proactively reduced the number of hours that minors can play its games, but the company was not nearly as restrictive as the government’s new rules. It limited minors to just an hour during weekdays and no more than two hours during vacations and holidays.

“Since 2017, Tencent has explored and applied various new technologies and functions for the protection of minors,” Tencent said in a messaged statement. “That will continue, as Tencent strictly abides by and actively implements the latest requirements from Chinese authorities.”