After an all-digital CES 2021, the tech world had high hopes for this year’s show. With vaccine cards in tow, vendors and journalists were ready to return to Las Vegas to sample the next big thing in consumer electronics at CES 2022.

Unfortunately, Omicron had different plans. As the variant made its presence known in late December, a number of companies and media outlets scrapped plans for in-person appearances (PCMag opted out a few months ago). The show did indeed go on, albeit with a early close, but it was a more subdued affair than the Consumer Technology Association had planned.

Thanks to the magic of live-streaming and virtual press briefings, we were still able to suss out a few trends from the show. Perhaps next year we’ll return to the maze of the Las Vegas Convention Center, but until then, here’s what caught our eye at CES 2022.

1. In 2022, Silicon Competition Is Going Mobile

Every year for the past five years or so, new computer processors have made their debut at CES, with Intel, AMD, and others claiming significant improvements over their previous-generation chips. CES 2022 was no different, but the silicon launches take on renewed importance given the worldwide chip shortages and novel, intense competition in the industry.

AMD’s offering is the Ryzen 6000 “Rembrandt” series, which the company promises will deliver faster performance and better power efficiency than the Ryzen 5000 series they replace when they arrive in laptops starting next month. For its part, Intel is claiming essentially the same thing with its 12th Generation “Alder Lake” laptop CPUs. Nvidia teased new GeForce RTX 3070 Ti and 3080 Ti laptop GPUs, while AMD pushed out a new Radeon RX 6000S series. The new GeForce RTX 3080 Ti is faster than the fastest desktop GPUs were just three years ago, Nvidia claims.

In the past, new chip offerings at CES played second fiddle to headlining features like foldable-screen or dual-screen laptops. But Rembrandt and Alder Lake are slightly bigger deals. For one thing, they represent the debut of entirely new technologies for both Intel (a new mix of performance and efficiency cores) and AMD (a new Zen 3+ architecture).

Perhaps more important, they have giant shoes to fill in the broader world outside Silicon Valley. Laptops and desktops are seeing renewed importance in the new work-from-home era, and ARM-based processors like the Apple M1 chips are now serious challengers to a once-sleepy silicon market that Intel pretty much had locked down. The result is a familiar trend, albeit one with renewed importance: Windows laptops launched in 2022 will be more powerful and power-efficient than their predecessors. Desktop CPU warfare will ramp up later in the year–AMD teased its “Zen 4” architecture for the second half of 2022, and Intel also used this year’s show to fill out its low-end desktop CPU offerings, which are also members of the 12th Generation family. But mobile chips are the big battleground for the first half of the year. 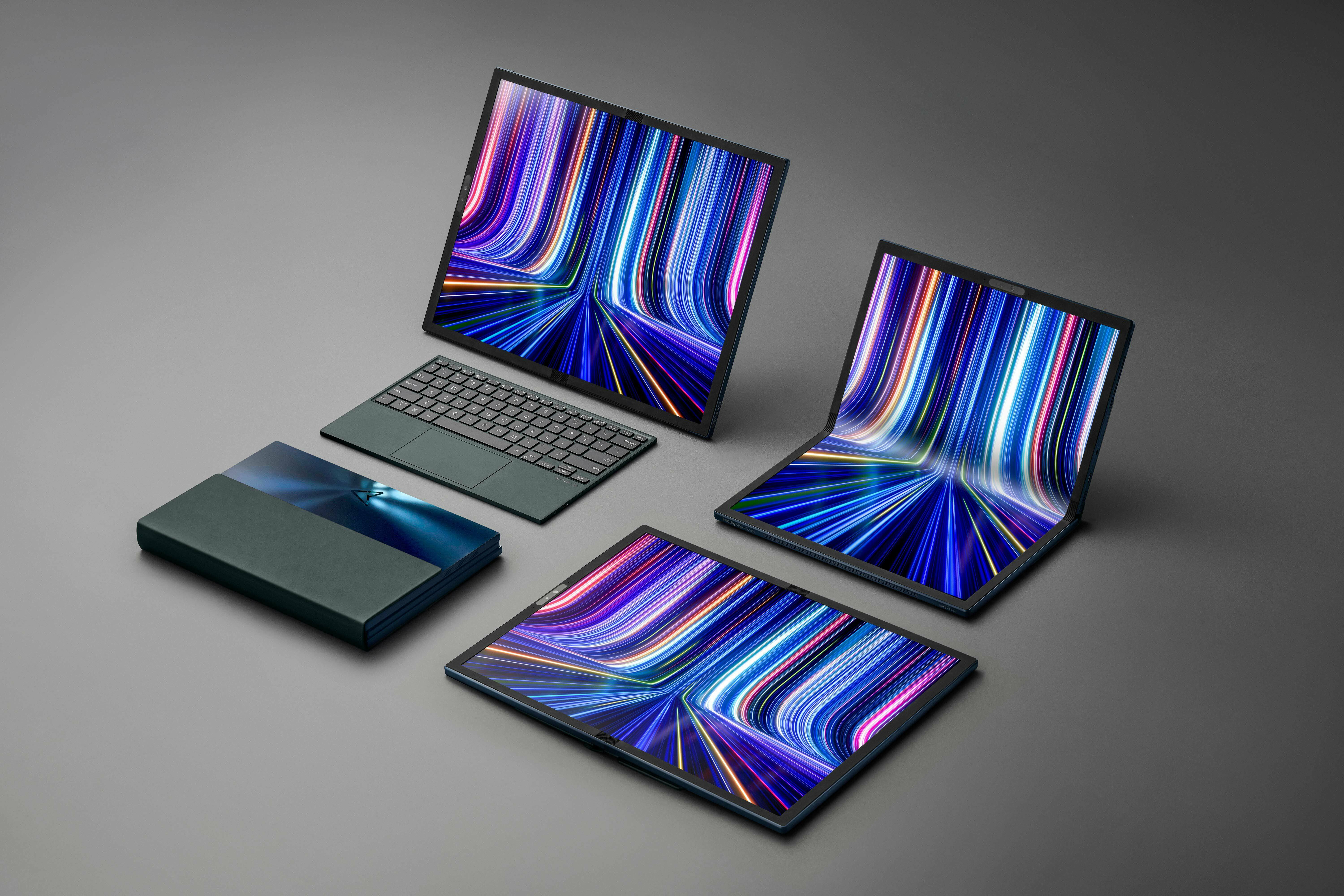 More than two years after the first foldable-screen and dual-screen laptops and phones first went on sale, CES 2022 finally brought some new, intriguing concepts to what has been a rather lethargic corner of the market. Among the most noteworthy announcements at the show are the Asus ZenBook 17 Fold OLED and the Lenovo ThinkBook Plus Gen 3.

The ZenBook 17 Fold is a riff on a foldable laptop-tablet hybrid in its purest form. It uses a unique hinge and a creased display to fold into an ultra-portable, easy-to-carry 12.5-inch device that’s smaller than a sheet of A4-sized photocopier paper. Unfolded, it acts as a full-fat 17-inch laptop, whose screen is complete with the inky blacks and brilliant colors we’ve come to expect from OLED technology.

Meanwhile, the ThinkBook Plus Gen 3 could be the most practical dual-screen laptop yet. Lenovo is touting it as the industry’s first 17-inch laptop with a built-in 8-inch, full-color, secondary LCD display located to the right of the keyboard. Debuting in May for $1,399 and up, the notebook’s main display has an astonishingly wide 21:10 aspect ratio.

The main handicap that these and other devices like them (including a nifty foldable-screen concept that Samsung teased at the show) share is software compatibility. Microsoft has largely abandoned its effort to design a tailor-made version of Windows for foldable and dual-screen laptops, though Windows 11 will take up some of the slack. But it’s up to each manufacturer to come up with well-designed software to make them work. If they can, 2022 might be the year foldable-screen and dual-screen laptops are finally worth buying. It’s possible that more innovative but flexible designs, like the Asus ROG Z13 Flow, a light gaming system masquerading as a Surface Pro-style detachable, might be more practical as far as 2022’s new attempts at design go.

While not every gaming monitor we saw at CES 2022 featured new display tech inside (several of our panel picks below were first seen in TV models from last year), those that did innovate brought some serious heat to the category.

OLED has been nothing but a series of fits and starts in gaming monitors thus far, but the new ultrawide Alienware 34 QD-OLED from Dell aims to change that. The monitor uses Quantum Dot technology to shore up one of OLED’s most common deficiencies that we’ve noticed in gaming monitors featuring the tech thus far: peak brightness. We got a chance to check the monitor out for ourselves during a pre-brief event with Dell in New York, and to borrow the easiest pun I could find after three days of straight brain-frying CES coverage; the future looks bright. 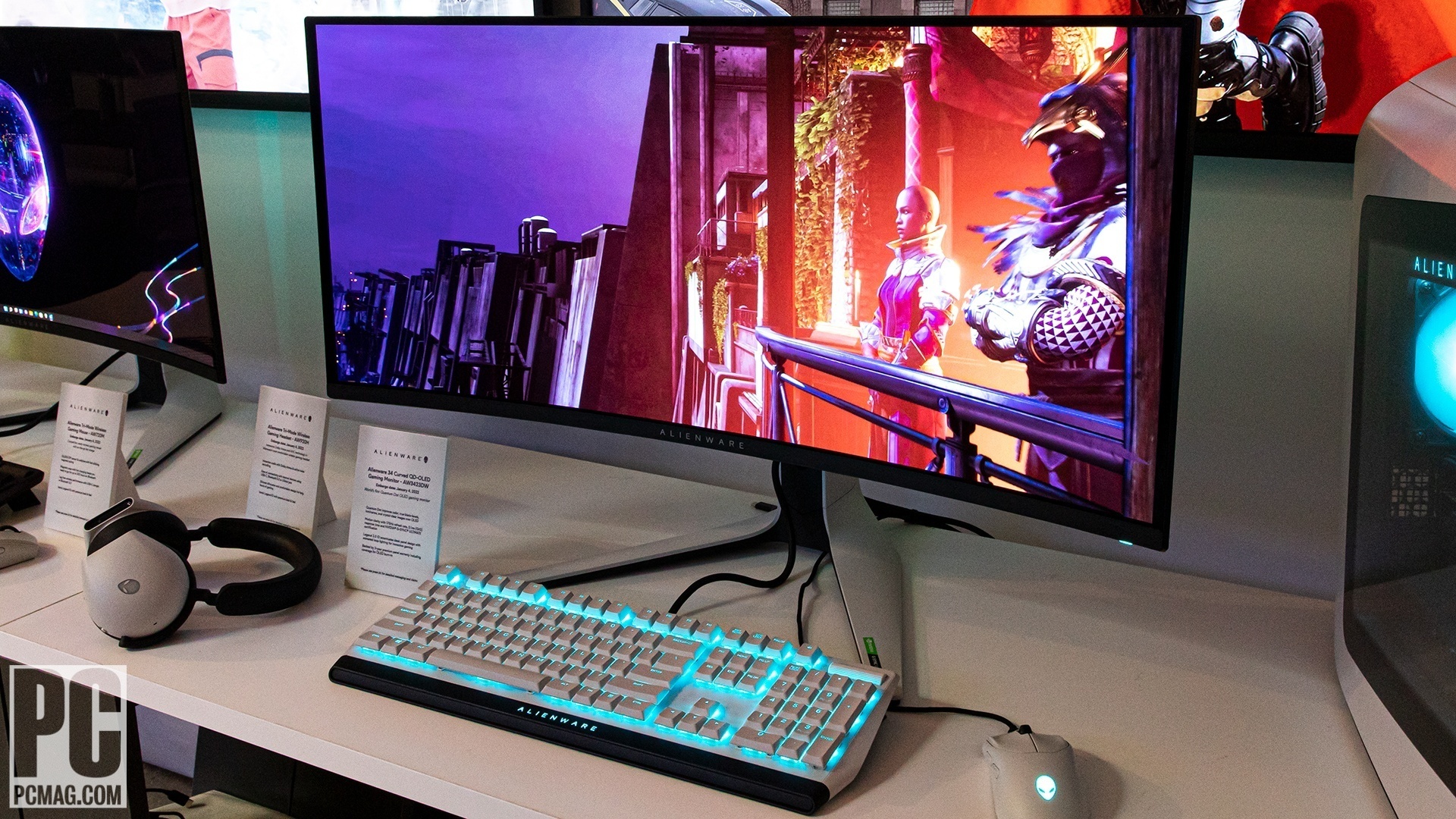 But if a 34-inch 21:9 monitor sounds a little too inclusive for you, then maybe opening things up to 42-inch, 48-inch, and 55-inch gaming monitor/TV hybrids might be a better fit. Both Gigabyte and Asus came to the table this year with “new” 4K/120Hz OLED gaming monitors that could make most living room-dwellers do a double take. They’re designed to fill a growing need for displays that match the max specs of a current-gen gaming console’s video output: 4K at 120fps. These specs might seem familiar to those already in love with LG’s CX line of OLED televisions launched last year. Now, though, we’ve got those panels inside of proper gaming monitors, complete with features like Asus’ anti-glare matte coating that should help multiplayer gamers tell the difference between the shine of a headlight and a flashbang just a bit better. 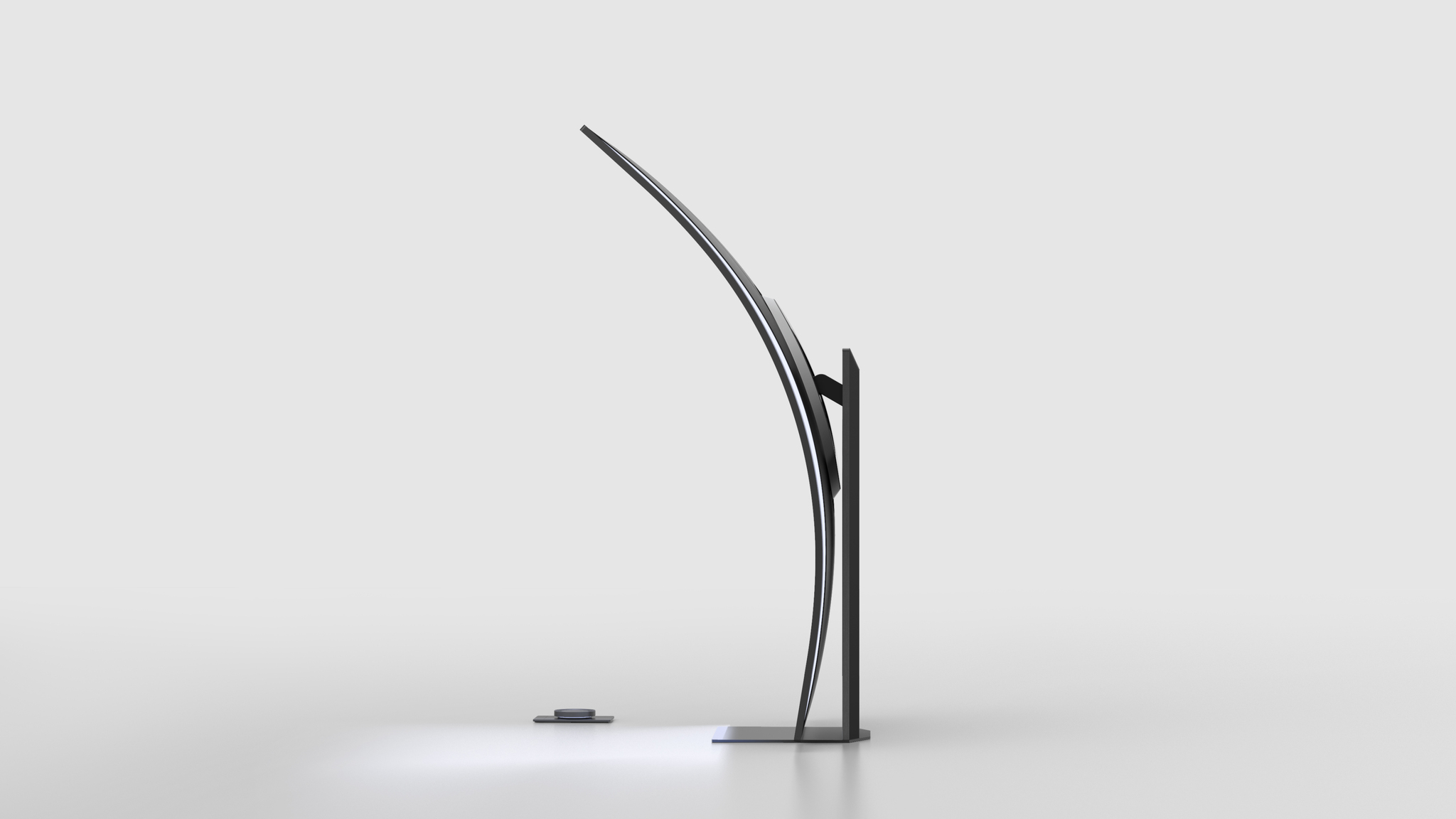 Finally there was a monitor that no one saw coming, and only a select few were allowed to even witness in action—the Samsung Odyssey Ark. Boasting a 55-inch 4K OLED panel with an astonishingly immersive 1000R curvature, this gaming monitor is both thinner and lighter than any other 1000R display to date. We don’t have much information yet, but will keep a close eye on everything Samsung’s displays arm is working on as news hits the wires.

Recommended by Our Editors

4. Virtual Reality Was Barely There

CES week saw some big news about consumer VR, but it wasn’t actually part of the show.

On Tuesday, Sony made the surprise announcement of PlayStation VR2, separate from its consumer electronics showing at CES. The long-awaited VR headset for the PlayStation 5 looks like a massive leap in technology over the PlayStation VR headset that launched in 2016 (and used motion controllers from 2010). 2,000-by-2,040 resolution per eye at 90/120Hz, eye-tracking technology previously only seen in high-end enterprise headsets, and long-awaited new motion controllers mean PSVR2 could be one of the biggest tethered systems yet.

The PSVR2 did not make an appearance at CES, and that’s weirdly the tone of VR at the show: Nothing much new. HTC showed off new accessories for its headsets, and a 5G partnership with Lumen Technologies for the standalone Vive Focus 3 (another enterprise-level headset), but that’s about it. No news from Facebook/Meta, though the company will probably announce something in the next few months. No news from Valve.

Plenty of VR software floated around CES touting online collaboration and other interactions as part of the “metaverse,” but a lot of it appears either speculative or simply recontextualized from before Facebook rebranded and started promoting the vague concept. PlayStation fans can look forward to the new VR tech, but there wasn’t much to see at CES. 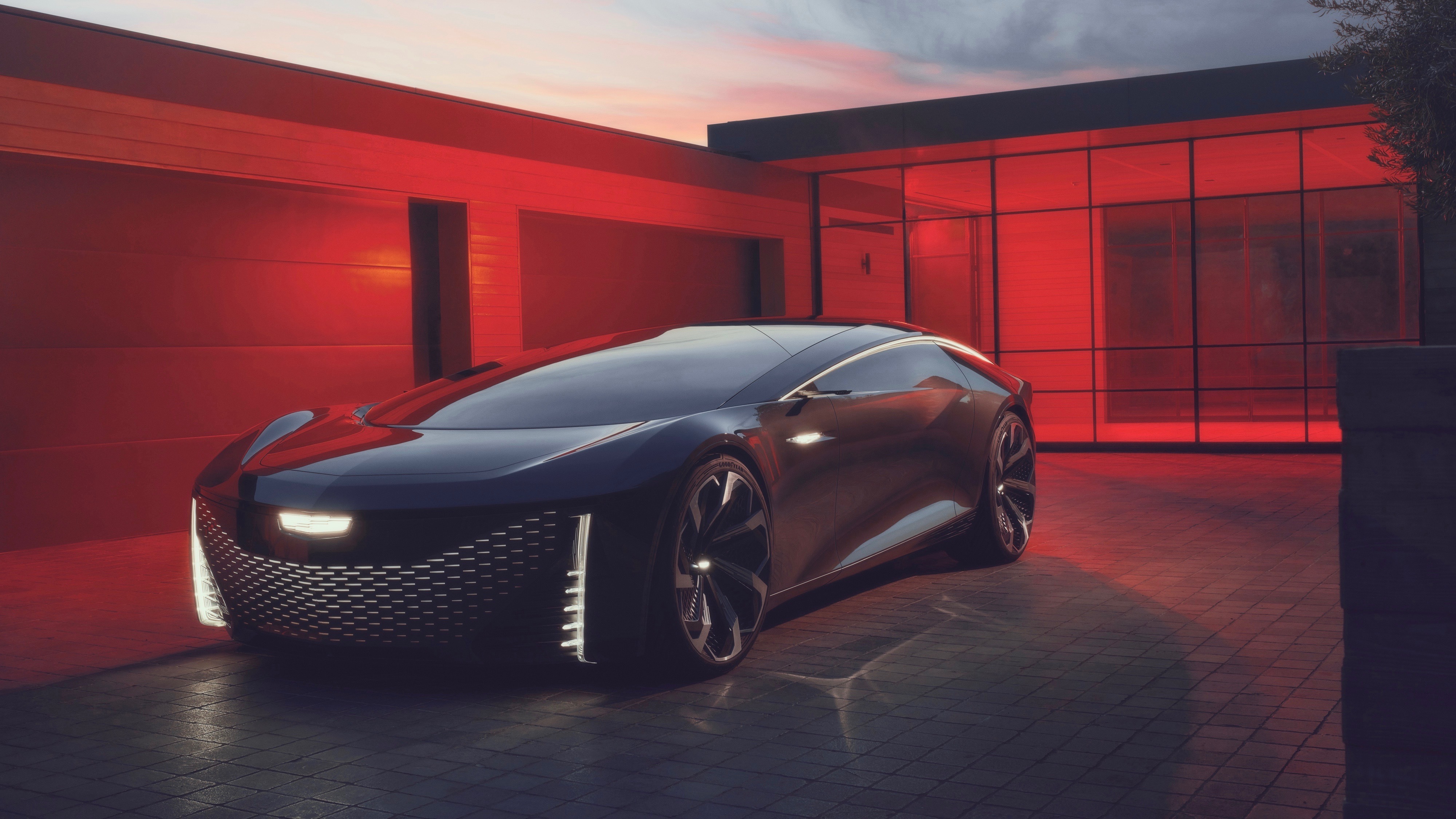 In a normal year, the CES show floor would be full of flashy, experimental, and pricey cars from the likes of BMW, GM, and Mercedes. But squeezing into the passenger seat of a car as strangers buzz around you snapping photos and gawking at futuristic interiors is less appealing in the age of Omicron. In fact, a resurgent COVID-19 prompted top automakers to cancel in-person appearances at CES 2022 and opt for live-streamed press conferences. 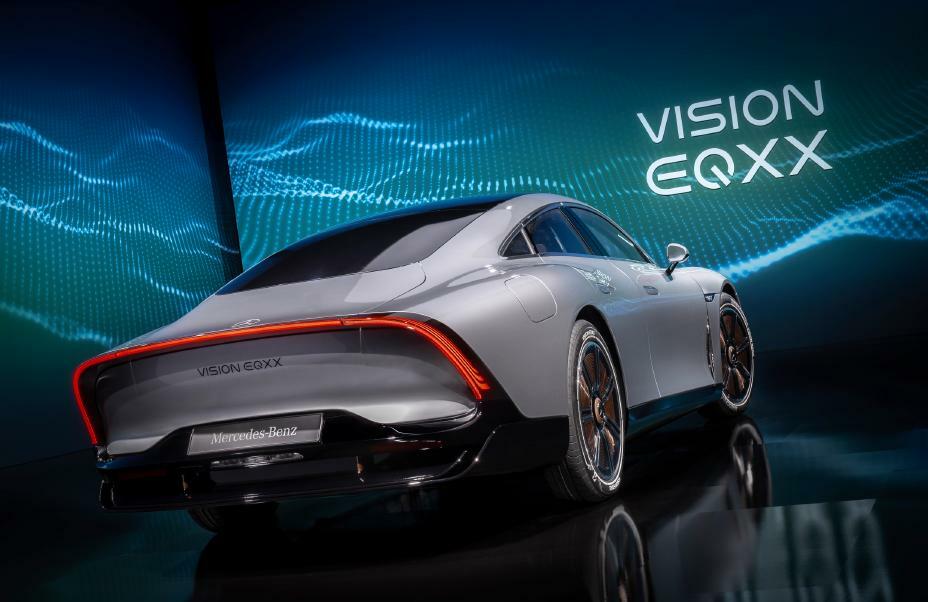 These virtual events focused on forward-looking concepts that turn the traditional sedan into sci-fi pods controlled by autonomous software. In Cadillac’s InnerSpace vision, for example, passengers sit back, relax, and customize their ride via touch controls and voice commands. BMW arrived at the show in a color-changing car, and shoved a 31-inch TV into the ceiling of a Series 7. And Mercedes-Benz showed off its Vision EQXX electric car, which it calls a “blueprint for the future of automotive engineering.”

Also on the EV front, Sony announced the upcoming launch of a new company, Sony Mobility Inc., to explore the commercial launch of a Sony-branded vehicle. And in things that might actually happen, General Motors introduced its Silverado EV pickup truck, which should arrive in late 2023, barring any production-related delays.

Get Our Best Stories!

Sign up for What’s New Now to get our top stories delivered to your inbox every morning.

This newsletter may contain advertising, deals, or affiliate links. Subscribing to a newsletter indicates your consent to our Terms of Use and Privacy Policy. You may unsubscribe from the newsletters at any time.

Google Pixel 6a may arrive sooner than you think

iPhone SE 3 could be coming soon — is iPhone 11 still worth buying?

Google Pixel 6a may arrive sooner than you think

iPhone SE 3 could be coming soon — is iPhone 11 still worth buying?